Are All People Born Good? 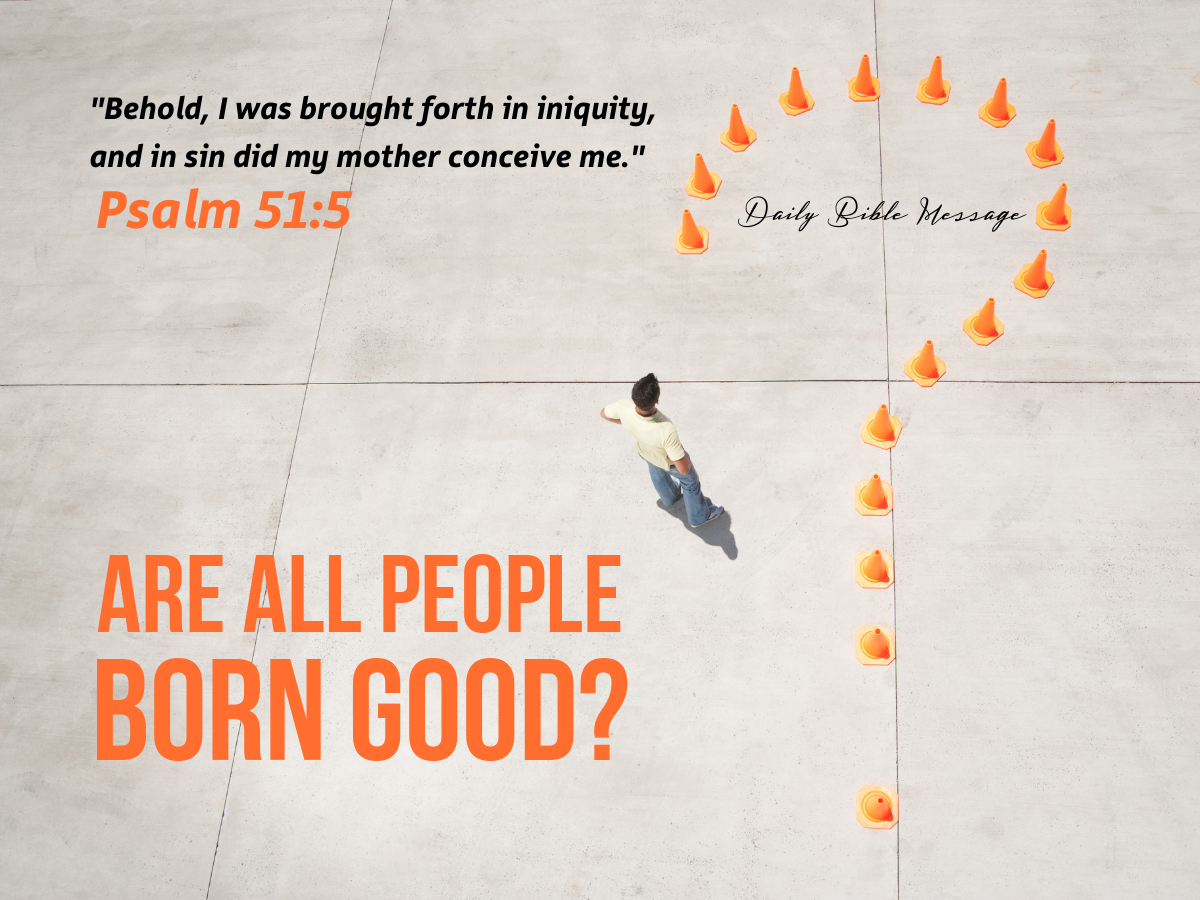 “Are all people born good?”

There is a common belief today that people are born “good” and most people remain basically good at heart their whole lives; according to this theory, the evil that some people exhibit is the result of environmental factors—people only turn “bad” when external forces beyond their control twist them away from their basic goodness. This is a false, unbiblical view of human nature.

The Bible teaches that none of us are good. We are all born sinners with a sinful, selfish nature inherited from Adam. Unless we are born again by the Spirit of God, we will never see the kingdom of God (John 3:3).

Psalm 14:2–3 counters the idea that anyone is “good”: “The Lord looks down from heaven on all mankind to see if there are any who understand, any who seek God. All have turned away, all have become corrupt; there is no one who does good, not even one.” Add to this Jesus’ statement that “No one is good—except God alone” (Luke 18:19), and we see that we all stand guilty before God.

In the beginning, God created an absolutely perfect world. God called His creation “very good” in Genesis 1:31. The Garden of Eden was the perfect environment for the first humans, Adam and Eve. Even in that perfect environment, with all their needs met and living in a state of innocence, Adam chose to disobey God. Adam couldn’t blame environmental factors for his sinful choice; it was simply an act of his will to rebel.

When Adam disobeyed God, the first couple lost their innocence, they were ejected from the Garden, and, importantly, their basic nature was corrupted (Genesis 3:7–12). Sin and death became a part of creation. Later, when Adam had a son, the Bible describes the event this way: “He had a son in his own likeness, after his own image” (Genesis 5:3). Like father, like son. The sinner begot a sinner. Now Adam’s sin has spread to all creation: “Sin entered the world through one man, and death through sin, and in this way death came to all people, because all sinned” (Romans 5:12).

People are not born “good” because every one of us has been affected by Adam’s sin; there are no exceptions. Romans 5:18 says that “one trespass resulted in condemnation for all people.” We are sinners for two reasons: we actively sin ourselves (we are sinners in practice), and we bear a sinful character passed down from Adam (we are sinners by nature). That’s why we all face physical death: “In Adam all die” (1 Corinthians 15:22).

It’s hard to imagine a sweet, innocent baby being a sinner, but the Bible indicates that even children possess a sin nature. Logically, if our sin nature is inherited from Adam, then babies must already possess the bent to sin. “Folly is bound up in the heart of a child” (Proverbs 22:15). Bolstering the truth of this proverb, a child’s sinful behavior begins to manifest itself quite early in his development; as soon as a child is able to start choosing between obedience and disobedience, he will begin “testing the waters” of disobedience. Children are naturally selfish, and their wayward nature is evident to anyone who has ever been around children.

The definitive passage on the fact that people are not born “good” is Psalm 51:5. Here, David speaks of his own sin nature beginning at conception: “I was guilty when I was born; I was sinful when my mother conceived me”(CSB).

There is nothing inherently “good” within any of us. There is nothing in us that could earn salvation, and on our own we have no ability to become worthy of God’s favor. We deserve only God’s wrath (Ephesians 2:3). We are dead in our sins (Ephesians 2:1). But thanks be to God, who chose to send His Son, Jesus, into the world. Jesus lived without sin, and His death on the cross paid the penalty we deserved.

God’s great love for us is the only reason He offers us such an amazing gift—the gift of forgiveness of sin! John 3:16–18 says, “For God so loved the world that He gave His one and only Son, that whoever believes in Him shall not perish but have eternal life. For God did not send His Son into the world to condemn the world, but to save the world through Him. Whoever believes in Him is not condemned, but whoever does not believe stands condemned already because they have not believed in the name of God’s one and only Son.”