Are You Struggling with Doubt? 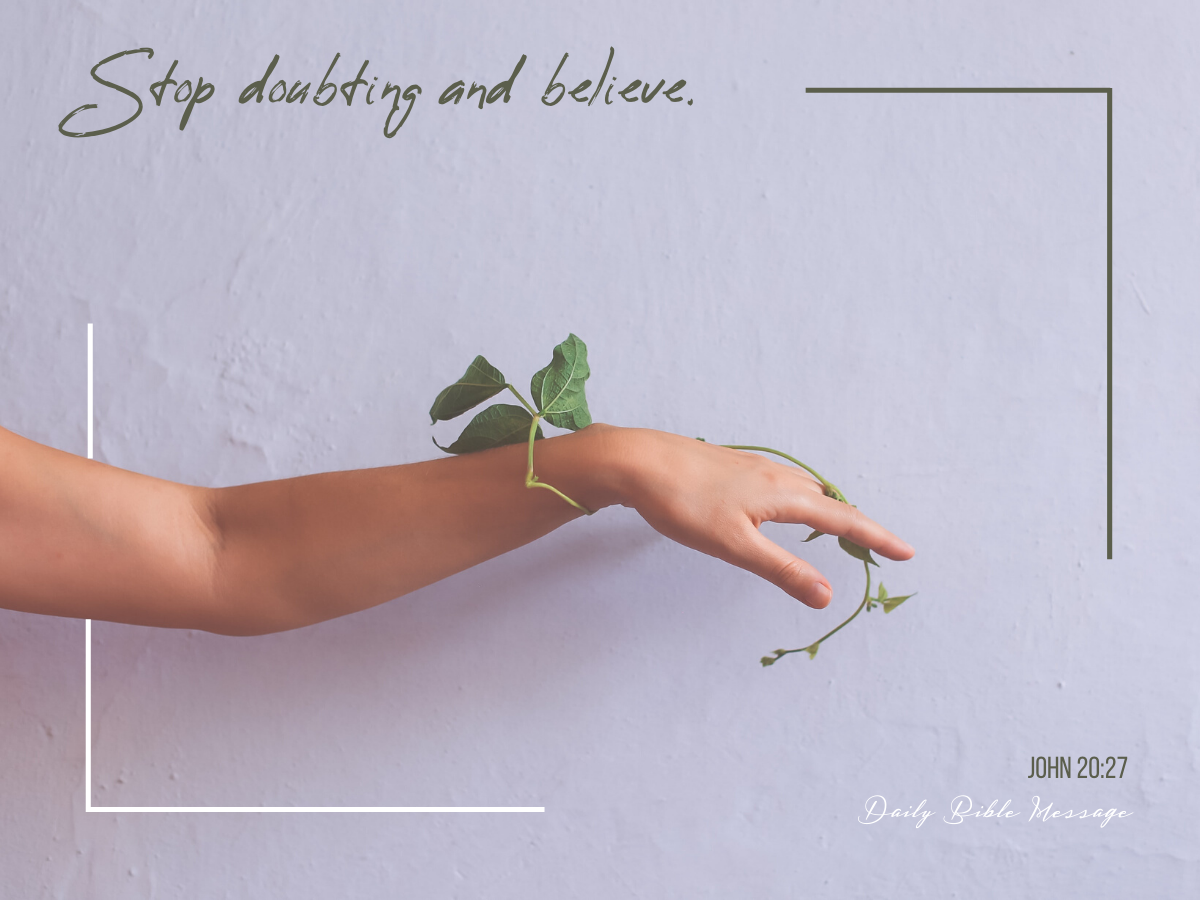 People struggle to believe. If this is you, it may help you to know that others shared the same struggle, even in the time of Jesus.

John tells us the marvelous story of Thomas. “Doubting” Thomas is the man in the inner-circle of the twelve who struggled to believe. The story begins like this: Jesus had appeared to ten disciples on the evening of the first day of the week. He came and stood among them and said to them, “Peace be with you” (John 20:19).

Then Jesus showed them His hands and His side, and said again, “Peace be with you. As the Father has sent Me, even so I am sending you.” And He breathed on them and said, “Receive the Holy Spirit” (John 20:20-22).

Why Do People Struggle to Believe?

Let me suggest three reasons, all of which were true for Thomas, and they are the experience of many people today.

If it were not for the resurrection, what could we say about the evil in the world? Darkness and injustice would remain unanswered at the heart of the universe forever.

But the Bible says that God “has fixed a day on which He will judge the world in righteousness by a man whom He has appointed; and of this He has given assurance to all by raising Him from the dead” (Acts 17:31).

For other people, the struggle to believe arises from massive disappointment. This too was true of Thomas.

Thomas left everything to follow Jesus. He had extended himself to serve Christ for three years. He had high hopes, along with the other disciples, that Jesus would lead them into great things. And this was a massive disappointment when all of that ended on Good Friday. How can God be good and in control when He lets this happen?

Maybe this is where you are—the loss of a job, the loss of your health, the loss of a loved one, the failure of a great venture, or the collapse of a once-vibrant ministry. Where is God in that?

It is only through the resurrection that we have anything to say. Justice will be called to account. The apostle Paul says, “I consider that the sufferings of this present time are not worth comparing with the glory that is to be revealed to us” (Romans 8:18).

We’re not told why Thomas was not with the other disciples when Jesus appeared on that first Sunday. He was there the following week, but it seems that Thomas was on an increasingly lonely path.

The risen Christ is gathering a great company of people from every generation in history and from every nation on the planet—people who love Him, trust Him, and who will enjoy Him forever. He is inviting you to be part of it—a community that will in every way exceed any community that has ever existed in the history of the world and will dispel loneliness.

How Christ Shows His Love For People Who Struggle with Doubts

Here is the good news for every person who has weak faith today: Christ loves people with weak faith, who have said, “I will never believe.” John records how Christ led Thomas to faith. Christ is able to lead you to faith, and I want you to see how He does it.

Christ shows his love through a surprising experience.

Jesus came and stood among them and said, “Peace be with you.”

I say this was “surprising” because no one was expecting it—certainly not Thomas!

This is how Jesus shows His love to a person struggling with doubt: He draws near, and in some way, you experience His presence. It can happen through a friend, or a family member, or through an article like this. At first you are not even sure you know who Christ is, but you become aware that He is there and He is reaching out to you.

When He comes near, he says, “Peace be with you! Don’t run away! I haven’t come to condemn you. I’ve come to lead you to faith!”

My prayer is that you’ll experience this today. You have struggled with faith. You have not felt that you could believe. But today Jesus Christ is reaching out to you in love.

“Put your finger here, and see My hands; and put out your hand, and place it in my side.”

Christ was not there when Thomas said, “I will never believe…Unless I see in His hands the marks of the nails, and place my finger into the marks of the nails, and place my hand into his side” (John 20:25). But Jesus knew what Thomas said, so it is very striking that when He appears, Christ does not write Thomas off. Christ does not say, “Well Thomas, you’ve made your position quite clear. Please pack your bags. I no longer want you as my disciple.”

No! Christ’s words are quite different: “Thomas, you said you would not believe unless there was overwhelming evidence. Very well—here it is: Put your finger here, and see my hands. Put out your hand and place it in my side.” Christian faith is not a blind leap in the dark. It is a reasoned trust in a risen Savior, based on compelling evidence.

The compelling evidence on which you can take a reasoned step of faith in Jesus Christ does not come by personal resurrection experiences for each of us. It comes through the evidence provided in the Gospels: “These have been written so that you may believe that Jesus is the Christ.” This is how you touch the evidence of who Jesus is.

You find yourself looking into the Bible, wanting to discover who He is, and as you read through the Gospels, you find compelling evidence that Jesus is the Christ, the Son of God, and by believing this, you have life in His name.

The Word of God is compelling to the awakened heart. You begin to see something that you did not see before. Why? Because He has been awakening faith in you.

Christ shows his love through a life-changing command.

“Do not disbelieve, but believe.”H

To me, this is the most wonderful thing of all: Jesus knew everything about Thomas. He knew what Thomas had said in secret. He knew all about His unbelief.

“In the light of your experience and in the light of the evidence, I call on you to stop doubting and believe. I want you as my disciple, Thomas.” What else was there for Thomas to do than to fall on His knees and confess Jesus as His Lord and His God?

How is Jesus Christ pursuing you? The Son of God reaches out to you in love and with grace today. He wants you to be His disciple. After all that He suffered to redeem sinners, it matters to Him that you should become His disciple.

He lays before you the evidence, through His Word, on which you can venture a reasoned trust in Him. He calls you! Now stop doubting and believe!

Do you struggle to believe? How does Thomas’ story encourage you?