Fear of the Lord: What Does It Mean? 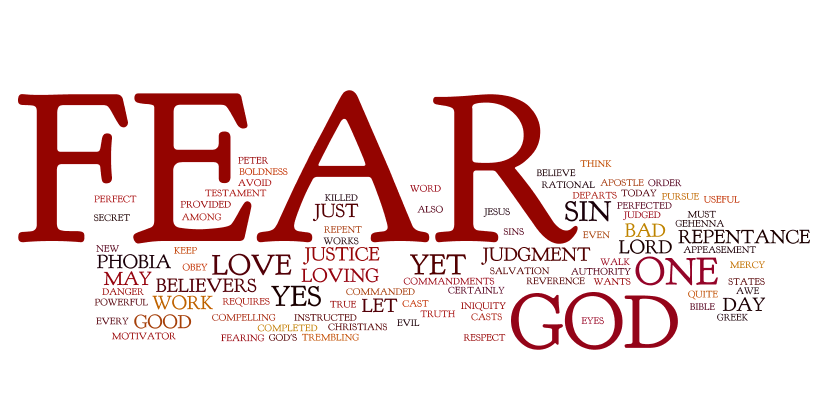 One biblical phrase that has troubled many people is the command to fear God. What does “fear of the Lord” mean, and why does God ask us to fear Him?

First, realize that there is a fear of God that doesn’t produce good results. This terrifying and paralyzing fear is likely the type of fear that comes to mind for many.

Such fear does not have a positive end. Obviously this fear is not what God is looking for. So what type of fear does God want us to have? The main Hebrew and Greek words translated fear in the Bible can have several shades of meaning, but in the context of the fear of the Lord, they convey a positive reverence.

The Greek noun phobos can mean “reverential fear” of God, “not a mere ‘fear’ of His power and righteous retribution, but a wholesome dread of displeasing Him” (Vine’s Complete Expository Dictionary of Old and New Testament Words, 1985, “Fear, Fearful, Fearfulness”). This is the type of positive, productive fear Luke describes in the early New Testament Church:

“Then the churches throughout all Judea, Galilee, and Samaria had peace and were edified. And walking in the fear of the Lord and in the comfort of the Holy Spirit, they were multiplied” (Acts 9:31, emphasis added).

One resource includes this helpful summary: “The fear of God is an attitude of respect, a response of reverence and wonder. It is the only appropriate response to our Creator and Redeemer” (Nelson’s NKJV Study Bible, 1997, note on Psalm 128:1). If you study the Bible, there is no mistaking the repeated commands to fear God. Wise King Solomon put it this way in explaining his reason for writing the book of Proverbs: “The fear of the LORD is the beginning of knowledge” (Proverbs 1:7).

Why? Consider these words of the psalmist: “The fear of the LORD is the beginning of wisdom; a good understanding have all those who do His commandments. His praise endures forever” (Psalm 111:10).

In Psalm 34 King David also tells us about learning the fear of the Lord: “Come, you children, listen to me; I will teach you the fear of the LORD. … Keep your tongue from evil, and your lips from speaking deceit. Depart from evil and do good; seek peace and pursue it” (verses 11, 13-14).

A healthy fear of God includes the fear of the consequences of disobedience. There may be times of temptation or trial when we may forget some of the better reasons for obeying God, and that is when we had better think of the consequences (Exodus 20:20).

This is what Hebrews 10:26-31 tells us: “For if we sin willfully after we have received the knowledge of the truth, there no longer remains a sacrifice for sins, but a certain fearful expectation of judgment, and fiery indignation which will devour the adversaries. Anyone who has rejected Moses’ law dies without mercy on the testimony of two or three witnesses.

“Of how much worse punishment, do you suppose, will he be thought worthy who has trampled the Son of God underfoot, counted the blood of the covenant by which he was sanctified a common thing, and insulted the Spirit of grace? For we know Him who said, ‘Vengeance is Mine, I will repay,’ says the Lord. And again, ‘The LORD will judge His people.’ It is a fearful thing to fall into the hands of the living God.”

Reverence of God helps us to take Him and His beneficial laws seriously. Being in harmony with the spiritual laws that govern the universe has astounding benefits. Many of these come in this life, but the greatest benefits will be experienced in the life to come (1 Timothy 4:8; Psalm 16:11). Consider this biblical analogy: Children learn their family rules partly through fear of correction (Hebrews 12:9-11). Of course, when they grow older, they should continue to follow the rules out of love.

God, whose family rules are even more important, also trains us to obey for our own good.

As incredible as it sounds, God wants us to actually be His children!

But we live in a world that is deceived and ruled by Satan. So we must come out of Satan’s ways—we must not be children of Satan (John 8:44). Instead we should learn the way of God’s family—the way of love. God is love (1 John 4:8), and His laws can be summarized as love for God and love for fellow man (Matthew 22:37-40). Sadly, however, everyone sins and earns the death penalty. If everyone is just going to die forever, what would be the purpose of fear? Sure, we might be depressed and terrified, but is that what God really wants?

Consider this fascinating passage: “If You, LORD, should mark iniquities, O Lord, who could stand? But there is forgiveness with You, that You may be feared” (Psalm 130:3-4).

“Love has been perfected among us in this: that we may have boldness in the day of judgment; because as He is, so are we in this world. There is no fear in love; but perfect love casts out fear, because fear involves torment. But he who fears has not been made perfect in love” (1 John 4:17-18).

A Greek-English Lexicon of the New Testament and Other Early Christian Literature by Arndt and Gingrich gives an excellent explanation of the use of phobos in verse 18. In the specific context of the verse, the meaning is “slavish fear … which is not to characterize the Christian’s relation to God.”

The same shade of meaning is applied to the word fear in Romans 8:15, “For you did not receive the spirit of bondage again to fear, but you received the Spirit of adoption by whom we cry out, ‘Abba, Father.’” Though we are to voluntarily yield ourselves as bond servants or slaves to God, He is not an abusive, cruel slave driver who terrorizes and torments us, which is the point of this verse.

Some misunderstand and think that love casts out not only fear but law. However, John explains that God’s laws actually define God’s love:

“For this is the love of God, that we keep His commandments. And His commandments are not burdensome” (1 John 5:3). This connection between God’s love and His 10 Commandments is also made clear in Paul’s writings and the Gospels (Romans 13:9-10; Matthew 22:37-40).

God wants His laws written on our hearts. For example, even if we had no fear of being caught, we should choose to never steal from others—because we love them and God.

We must never lose our respect and appreciation for God, but we should grow beyond being motivated solely by fear and rather be motivated by God’s love—having a deep love and respect for God and His words.

A different Greek word for fear is found in 2 Timothy 1:7: “For God has not given us a spirit of fear, but of power and of love and of a sound mind.” The Greek deilia means “cowardice, timidity, fearfulness” (Spiros Zodhiates, The Complete Word Study New Testament). Deilia is consistently used in a negative manner, unlike phobos. Revelation 21:8, referred to earlier, uses deilos, the adjective form of this word. So, rather than a paralyzing terror, the positive fear of the Lord taught in the Bible is a key element in change. It helps us have a proper, humble perspective of ourselves in relation to our awesome God; it helps us in times of temptation when we need to remember the serious consequences of disobeying God; and it motivates us to become more like our loving Creator.

By doing these things, the fear of the Lord helps bring eternal benefits: