When You Do Not Know What to Do 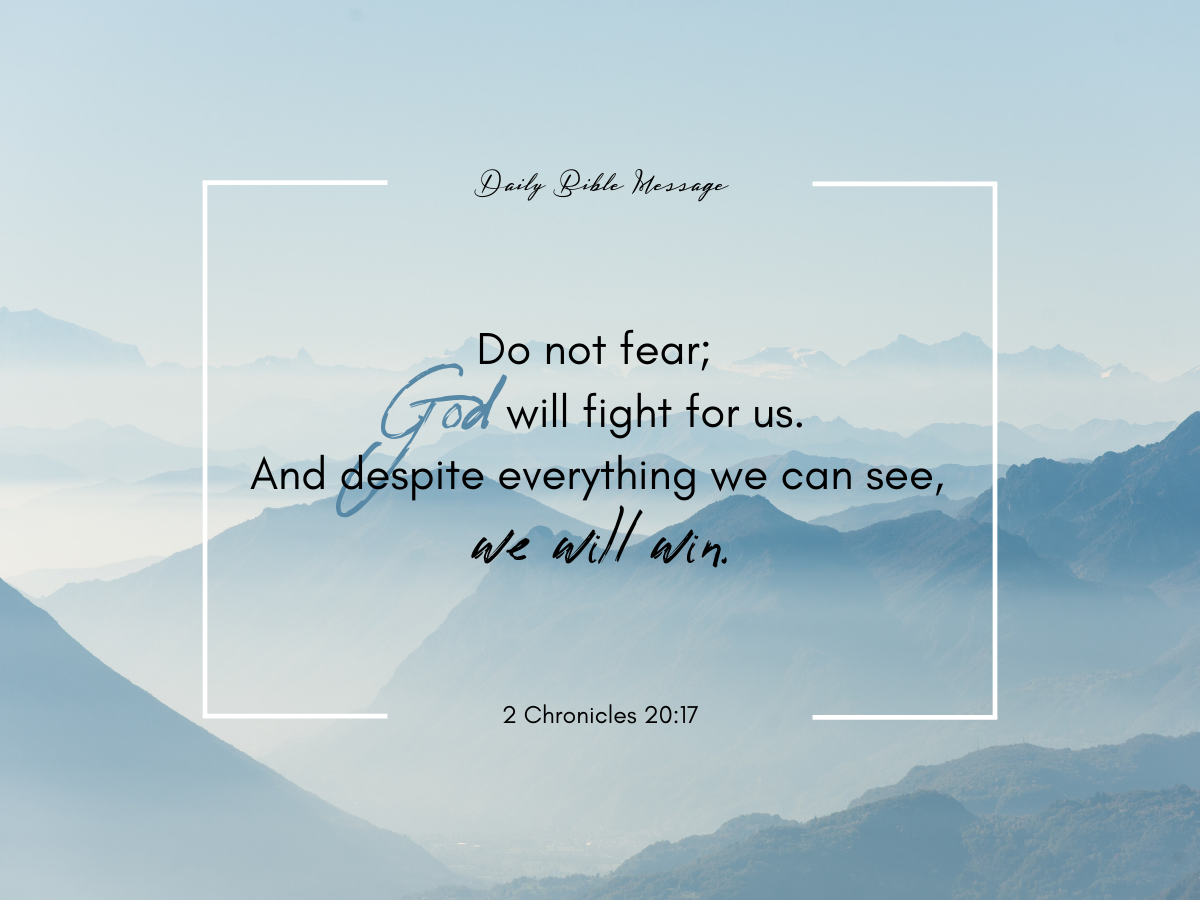 When was the last time a trial came so swiftly and forcefully that you did not know what to do?

A woman has lived in chronic pain for eight years. Recently, however, she woke up one morning with new health concerns that brought another hard, confusing, and frightening reality — a heavy one laid on top of the one she already living with day to day. She had just moved to a new home, and was going to a new church. Her husband was the new pastor of that church. Thier newborn was only six weeks old.

They felt like the armies of our circumstances were closing in around us with nowhere to go. As a husband and father, he felt completely off-balance. No one could encourage him. He felt helpless to help his wife, overwhelmed by the weight of her suffering. Why, God? Even after years of her chronic pain — and seeing the good God does through it — he felt like he was back to square one of faith, just clinging by a thread. He was supposed to be pastoring others, but he felt like could speak but one word to God: “Help.”

Around that time, they found a story of a king who felt helpless to protect and care for the people he was responsible for. A king also overwhelmed with fear. King Jehoshaphat finds out that there is a “great multitude” coming soon to attack his people (2 Chronicles 20:1–2) — an army they know they cannot compete with on their own.

Most of us will never feel what he felt; we will never literally be under the attack of a great army marching up to our door. But we can all relate to overwhelming circumstances in our life that make us feel trapped, helpless, and certain we won’t make it much longer. The Bible is honest about how King Jehoshaphat felt when he got the news about the army of certain doom heading his way — he was afraid (2 Chronicles 20:3). His response to that fear is remarkable. He calls a fast in all of Judah and gathers the people to seek the Lord and His help (2 Chronicles 20:4).

This is not a natural human response. If someone asks us how we are doing at church, the answer almost automatically spills out, “I’m good.” Our profiles put our best, most carefully portrayed images of strength and sufficiency forward. We don’t readily admit that we’re often afraid, broken, lonely, despairing, failing in sin, and struggling to see or trust God.

Jehoshaphat could have pretended he wasn’t afraid. He could have acted like he had it all together. He could have gathered the generals and made the best plan possible. Instead, he gathered the people, admitted his weakness, and sought the help of the Lord together — instead, he prayed. He prays, “We are powerless against this great horde that is coming against us. We do not know what to do, but our eyes are on you” (2 Chronicles 20:12). He not only runs to God in prayer himself, but he also calls others to pray with him.

Did You Not, Our God?

While Jehoshaphat is admittedly afraid and without a good plan himself, he is not despairing. In fact, his prayer rings with boldness and steady hope in the God of his people. Where does his courage come from?

Did you not, our God, drive out the inhabitants of this land before your people Israel, and give it forever to the descendants of Abraham your friend? And they have lived in it and have built for you in it a sanctuary for your name, saying, “If disaster comes upon us, the sword, judgment, or pestilence, or famine, we will stand before this house and before you — for your name is in this house — and cry out to you in our affliction, and you will hear and save.”

Jehoshaphat’s hope is built on the promises and presence of God. It is God’s name that dwells in Judah, and therefore his glory is at stake in this great horde marching against them. Jehoshaphat knows that God is passionate about his glory and faithful to keep all his promises, so he appeals to him with great confidence and directness knowing he’ll find well-timed help because of the covenant love of God (Hebrews 4:14–16).

In the same way, even when we feel overwhelmed by our circumstances, steady hope lives and endures in the promises of God to us in Christ. Jesus is the Good Shepherd who will lead us even in the valley of the shadow of death, pursuing us with His goodness and mercy all the days of our lives (Psalm 23:4, 6). Jesus will not break a bruised reed or put out a smoldering wick (Isaiah 42:3). Jesus will pour out His all-sufficient grace as we boast in our weaknesses (2 Corinthians 12:7–10). Nothing will separate us from the love of God in Christ Jesus our Lord as he works all things for our good (Romans 8:28–39).

When we are afraid, we pray with confidence because of these sure and steady promises — promises that are ours because Jesus bled and died to make us sons and daughters of God.

God Spoke Through Whom?

As Jehoshaphat draws the people together to pray, God sends strength and encouragement in an unexpected way. The Spirit of God fills, not Jehoshaphat, but a man named Jahaziel (2 Chronicles 20:14). Jahaziel rises and declares,

The particular word of hope that needs to be spoken does not always come to the king — or, in our day, to the pastor or small-group leader. As we suffer, share our burdens with one another, and seek the Lord together through prayer, God very often will speak through someone else.

Our individualized society, at least in the West, has often invaded our churches. We gather together once a week to sing, pray, take the Lord’s Table, and hear God’s word preached (still a beautiful thing!), but often don’t actually live like a blood-bought family — at least not like the one we see in the New Testament (Acts 2:42–47; 20:28).

Members of the early church were so close, and the self-giving love of Christ was so prevalent among them, that none of them counted any of their possessions as their own. They gladly met the needs of one another. The apostle Paul calls Christians to join him in prayer, so that as many pray and God answers, God gets more glory (2 Corinthians 1:11). It feels simpler and easier and more comfortable to keep our struggles to ourselves and search for our own answers. But God Has placed believers in a body — in a family where he manifests His love through mutual care and prayer.

In other words, if we don’t let other people into our trials and crises, we miss out on the blessing we might have received from God.]

What Is Our Victory?

Again, they do a surprising thing. They send the band out first (2 Chronicles 20:21–22). This is not sound practice for winning a battle. It is sound practice for worship, when you trust the God who Has given you a promise. As they begin to sing, the Lord routes the greater, stronger army. Israel praises His name for the great victory.

You might be thinking, How can I worship when it seems like the Lord is not winning the battle that way for me? How can we worship as we march into what seems like overwhelming odds, without a specific word from God about our situation?

The answer is that our victory in Christ is as sure as the victory promised to Judah, if we believe what God Has said in Christ. The Bible promises us that, whatever we may face or suffer or lose in this life, those whom God predestined are called, those called are justified, and those justified are glorified. It is certain. Our future is secure. For us “to live is Christ, and to die is gain” (Philippians 1:21).

Welcome God (and Others)

We can lay down our self-sufficiency, invite others into our fears, and then pray and worship expectantly, knowing that one way or another, our victory is sure. As sure as Judah’s victory over the Moabites and Ammonites.

As The Pastor and his bride have walked through thier current trial, they’ve felt God lead them to let people into the war with them. And they have been overwhelmed by the prayers and encouragement they have received. Under God, they have sustained and held up their eyes to Jesus in the midst of what feels, at times, like overwhelming pain and fear.

God will work in and among His people to save and sustain us as we boldly approach Him together. He has designed His universe to work this way, so that we are weaned off of self-sufficiency, into fuller dependence on Him for everything we need, so that, over and over again, He gets the glory.]