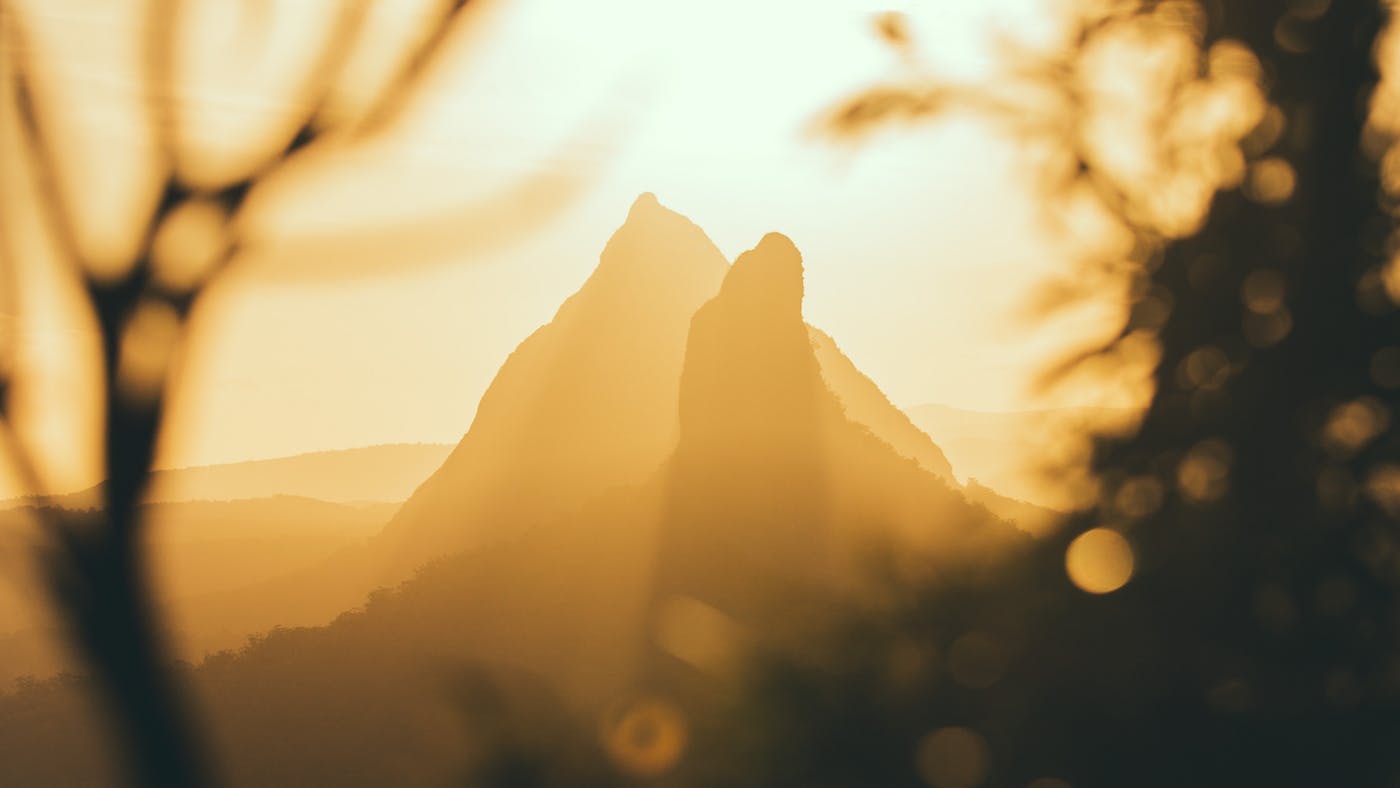 We took a knee. John Fogerty’s “Centerfield” or Alabama’s “Cheap Seats” would be playing over the loudspeakers. The crowd was settling into the bleachers. The infielders had finished up the final round of pregame grounders. The whole team sprinted to a spot in foul ground about thirty feet from the base, and kneeled to hear Coach’s game-time reminders and directions. Then, like clockwork, he would utter the tired and worn words again: “Our Father.”

The whole team of Southern boys joined in. “Who art in heaven.” “Hallowed be thy name.” “Thy kingdom come.” “Thy will be done. . . .” A few of us appreciated the quick Godward moment. Most simply hoped that somehow the incantation might help us win.

Hallowed be thy name. Between morning prayers and irregular rosaries in Catholic grade school, and then high school baseball — spring, summer, and fall — I must have prayed that line hundreds of times with little (if any) clue of its significance. I might as well have been saying, “Hollow be thy name.”

Put yourself there with the disciples when they asked Jesus how to pray (Luke 11:1). How to pray! What would he say? Whatever comes next, these will be some of the most important words in the history of the world. No wonder Catholic school boys and high school baseball players still recite them two thousand years later. What a tragedy, then, how often they amount to meaningless repetition and “empty phrases” — the very thing Jesus warned us about in the preamble to his prayer. “When you pray, do not heap up empty phrases as the Gentiles do” (Matthew 6:7). And chief among the emptiness for many of us has been the one we’ve said the most.

After addressing God as Father, a monumental development nearly impossible to overstate, what first request would Jesus make? What initial petition would headline not just the prayer of the Son of God to his Father but the model prayer, the carefully chosen words designed by the Christ to teach his disciples how to pray? Could this not be one of the most important pleas (if not the single most important) any human could utter? What Jesus says next will change everything: “Hallowed be thy name.”

For His Name’s Sake

The legacy of longing to see God’s glory, and petitioning God to see it, goes back at least to Moses, who prayed, courageously, “Please show me your glory” (Exodus 33:18). It was a bold request. And he was not denied. God was pleased to answer, and he put on display for Moses not the fullness of his glory, but the back, and that glimpse proved to be plenty for the moment. And so, God’s people learned to appeal to God for his name’s sake, for his glory, whether in general (Psalm 109:21; 115:1), or, as in Psalm 23, for guidance: “He leads me in paths of righteousness for his name’s sake” (Psalm 23:3; see also Psalm 31:3).

In fact, God’s righteous concern for the hallowing of his name is why, he says, he delivered his people from Egypt. They were sinners, and undeserving, and yet “he saved them for his name’s sake, that he might make known his mighty power” (Psalm 106:8). “I acted for the sake of my name, that it should not be profaned in the sight of the nations among whom they lived, in whose sight I made myself known to them in bringing them out of the land of Egypt” (Ezekiel 20:9; see also Ezekiel 20:14, 22). Then after Egypt, how would distressed Israelites appeal to God for deliverance? “Help us, O God of our salvation, for the glory of your name; deliver us, and atone for our sins, for your name’s sake!” (Psalm 79:9; see also Psalm 143:11).

Not just deliverance when victimized, but also pardon for sin. Whether in the Psalms: “For your name’s sake, O Lord, pardon my guilt, for it is great” (Psalm 25:11). Or in the prophets: “Though our iniquities testify against us, act, O Lord, for your name’s sake; for our backslidings are many; we have sinned against you” (Jeremiah 14:7; see also Jeremiah 14:21). Or even in the church: “Your sins are forgiven for his name’s sake” (1 John 2:12).

When God’s people make their bottom-line plea that he not destroy us for our sin, or forsake us in our faithlessness, we appeal, as Samuel did, “for his great name’s sake” (1 Samuel 12:22). What confidence do we have that his righteous wrath will not consume rebels like us? There is no greater ground imaginable for a sinner’s rescue than God’s own hallowing of his name.

“Hallowed be your name” was, indeed, no empty phrase for Jesus. It not only headlined his model prayer for his disciples, but also his High Priestly Prayer the night before he died. “Father, the hour has come; glorify your Son that the Son may glorify you” (John 17:1). Foremost in his mind as he went to the cross was the “name” (John 17:6, 11–12, 26) and “glory” (John 17:5, 22, 24) of his Father. He not only prayed and lived, but he even gave himself up to torture and death for the hallowing of his Father’s name.

Far from being hollow, Jesus’s lead petition taps in to the very foundation and goal of all history — the rock-bottom commitment of God himself, and the very heart of his Son. Let’s not let old English be lost on us who know our Bibles and pray without ceasing, without pretense, and without ignorance for the hallowing of our Father’s name. It is his favorite prayer to answer.

“Father, the hour has come; glorify your Son that the Son may glorify you” (John 17:1)

There has been no controversy or doubt, then or now, about what Jesus said. Matthew and Luke agree down to every Greek stroke: hagiasthētō to onoma sou (Matthew 6:9; Luke 11:2). In English, Wycliffe translated that line, in 1389, “Halwid be thi name.” More than a century later, in 1526, Tyndale did the same: “Halowed be thy name.” The King James Version followed suit in 1611: “Hallowed be thy name.”

The verb (hagiazō, to treat as holy) appears 28 times in the New Testament, with its noun and adjective forms occurring more than 300 times (400 more in the Old Testament). Hallow, which means to consecrate or set apart or honor as holy, has fallen largely into disuse today. Annually we mark Halloween, and sometimes we refer to hallowed grounds, but we do not hallow. Not like we once did. As far back as 250 years ago, in 1768, Benjamin Franklin sensed the problem and rendered this paraphrase of the line: “May all revere thee.”

When Jesus begins his model prayer with “hallowed be your name,” what is he asking? Father, may you set your name apart from every other name. Cause your reputation to be esteemed and reverenced and treasured above all others. Glorify your name. When we hear the Son of God pray like this, we should not be surprised. He is not the first to appeal to God’s name, to his honor and glory, as the rock-bottom ground for God’s action. Nor should he be the last.

Not for Your Sake

Then, after his people had gone into exile, why would God restore them? Not because of their good ways or admirable deeds — but despite their evil ways and corrupt deeds — “for my name’s sake” (Ezekiel 20:44). “It is not for your sake, O house of Israel, that I am about to act [to restore you], but for the sake of my holy name . . . . I will vindicate the holiness of my great name” (Ezekiel 36:22–23). Likewise, it was to God’s own name and glory that Daniel appealed on behalf of his people in exile (Daniel 9:15, 17, 18, 19).

At the height of Israel’s kingdom, Solomon had prayed for the hallowing of God’s “great name . . . that all the peoples of the earth may know your name and fear you, as do your people Israel, and that they may know that this house that I have built is called by your name” (1 Kings 8:41–43; 2 Chronicles 6:32–33). This is the same impulse that one day found new-covenant expression in the apostle Paul, who sought “to bring about the obedience of faith for the sake of his name among all the nations” (Romans 1:5). Why did Paul have to suffer so much? For the sake of Christ’s name (Acts 9:16).

And where, at bottom, do suffering Christians find the spiritual and emotional resources to persevere in persecution? “You are enduring patiently and bearing up for my name’s sake, and you have not grown weary” (Revelation 2:3).

You are enduring patiently and bearing up for my name’s sake, and you have not grown weary” (Revelation 2:3).